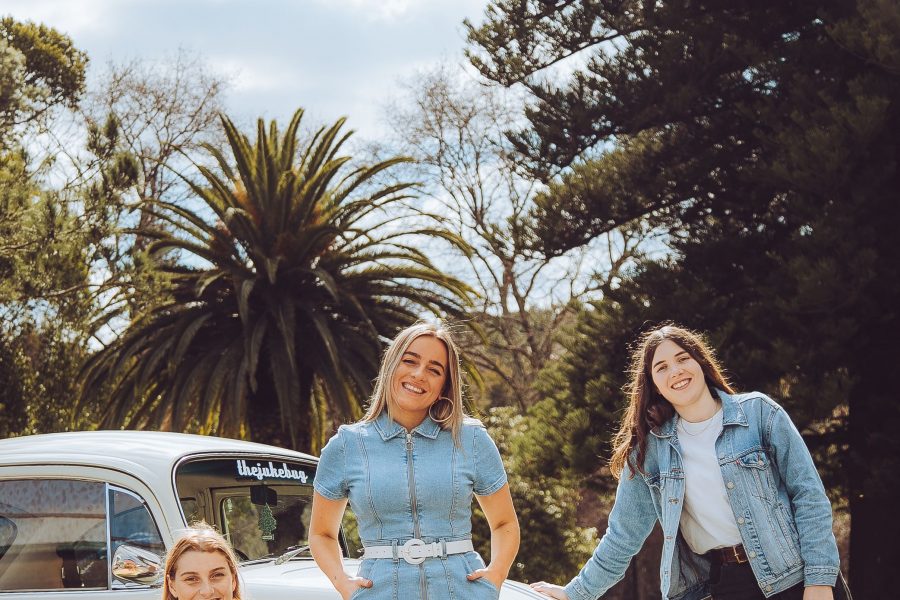 Scattered across the outskirts of Western Australia, four young girls discovered their fathomless passion for music. Ashleigh Carr-White, Timieka Denton, Saskia Brittain and Madison Hanley didn’t all know each other then, but it was only a matter of time before the inexplicable forces of the universe would have them cross paths. There’s no denying that fate brought Dulcie together.

“We all grew up outside of the city and around nature.” – Madison

In a house tucked away in the Perth Hills, Dulcie drummer Madison first picked up the sticks when she turned eight. Bass player and vocalist, Timieka, and guitarist and vocalist, Saskia, both spent their formative years in the serene coastal town of Denmark. Coming from a musical family, experimenting with harmonies and instruments was a rite of passage for Saskia. For Timieka, music was a welcome distraction: “When you’re growing up on a farm, there’s nothing much else to do. You get bored and pick stuff up.” The group’s keyboardist and vocalist, Ashleigh, lived in the pretty port town of Dampier and was taught piano by her mother.

It wasn’t too long before their worlds collided. In fact, Saskia and Timieka became friends when they were just toddlers, while Madison and Ashleigh first met during their high school years. However, it was at the reputable WAAPA in 2018 that the stars completely aligned, and the melodious, smooth sound of Dulcie was born.

“We all come from totally different creative directions.” – Timieka

Between impromptu jam sessions at Saskia’s place and WAAPA’s studio rooms, the girls tried tirelessly to define their indie pop-inspired style. Instead, they arrived at the conclusion that their soaring hooks and inventive melodies simply could not be confined to the limits of one genre. Dulcie’s sound is an amalgamation of their individual musical influences. “One of us will be like, ‘How good is Phoebe Bridgers?’ and someone else will say, ‘Have you heard the new Arctic Monkeys album?’” Madison says.

Of course, Dulcie isn’t just defying normality in terms of genre. Refusing to accept that there can only be one lead singer, they interchange between three vocalists, which makes their sound even more distinctive. But this rebellion has proved advantageous for Dulcie. Their idiosyncratic style immediately turned heads at triple j, and Ocean Alley dubbed their soulful debut single “Fall” their favourite track of 2019. Whether it’s supporting G Flip, playing Groovin the Moo Bunbury or touring with Polish Club, Dulcie’s electric presence cannot be denied.

“We like summery colours and that Woodstock kind of vibe.” – Ashleigh

The band’s effortlessly cool energy and quirkiness is amplified at their live gigs. Usually spotted wearing vintage pink overalls or bright retro tops, it’s easy to forget you’re not stuck in some kind of ‘70s time loop. This profound sense of nostalgia is also reflected in their name. Derived from the Latin word ‘dulcis’, which means ‘sweet’, Dulcie is named after Ashleigh’s great-grandmother, who was also a talented singer.

“I signed my guitar when I was about five.” – Saskia

‘Sweet’ is definitely one way to describe the members of Dulcie, but they are also eager to leave their mark on the Australian music scene. “I remember when I was younger, I signed my guitar when I was about five,” Saskia says. There’s no doubt that these girls can afford to dream that big. After all, at the rate Dulcie is going, their signatures will all be worth something one day.