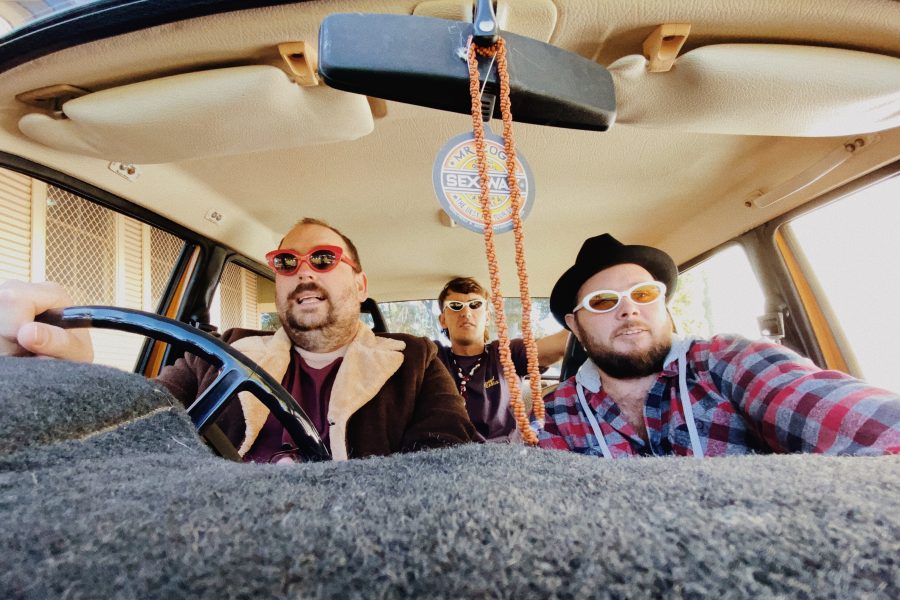 Esperance based three-piece Grand Casual seem a little unusual. It’s not all that often that three musicians draw together with boldly different personalities, influences and life experience to create music that perfectly reflects this fact. Matt Cooper is a window cleaner by trade though don’t let his day to day employment sway your perception of the man. Cooper is a tinkerer a perfectionist a partially deaf guitarist who’s search for exotic and interesting tones gives rise to an ever-evolving sound for the three-piece. Forever altering his musical tools, Matt occasionally leaves the pedantic vocalist and comedic drummer somewhat exasperated, though this exasperation quickly turns to delight when something fresh bends its way from a finely tuned Fender.

Joe Franzone is the youngest of the three, a man caught between comedy, acting, ridiculous haircuts, social influencer, and finally where his true talent lies, behind a set of Pro Mark drum sticks he regularly pretends are wizards wands. And a wizard he is. To see the depth of concentration ripple across the lad’s visage as his explosive, and intricate drumming style ignites a Grand Casual live set, leaving the audience spellbound is something truly special. Wizardry abounds with revellers floored by the realisation that Joe is drumming one handed and taking the roll of bass player with his second hand, musicians favourite milk crates holding his second weapon of choice a novation Bass Station Synthesiser.

Kyron spent his younger years imagining how it would feel to perform as a solitary vocalist, allowed to move where an accompanying guitar would not allow, allowed to dance the way a smooth surface, wide open space, enthralled audience and lack of inhibition would allow. Able to drift vocals across music drawn forth by two of the most exuberant performers regional WA has produced. Finally he has that chance, finally he gets to channel Elvis, Jim Morrison, Johnny Cash, Keenan Maynard, heroes, legends enraptured by the bliss that is live performance. Kyron is pedantic, over organised, quick to stress, this persona fades away when Grand Casual takes the stage.

Emerging from Pandemonium 2020 with vigour, Grand Casual headed into the studio with Andy Lawson at De Baser studio Perth, fresh tunes set to fall throughout Summer 2020/2021. A stellar run of dates in October 2020 saw the lads return to live performance, highlights being sold out shows at The Indian Ocean Hotel, Saturday Night Jive Esperance and rounded out with a career highlight supporting Karnivool in Kalgoorlie. Grand Casual, There’s nothing casual about these guys.