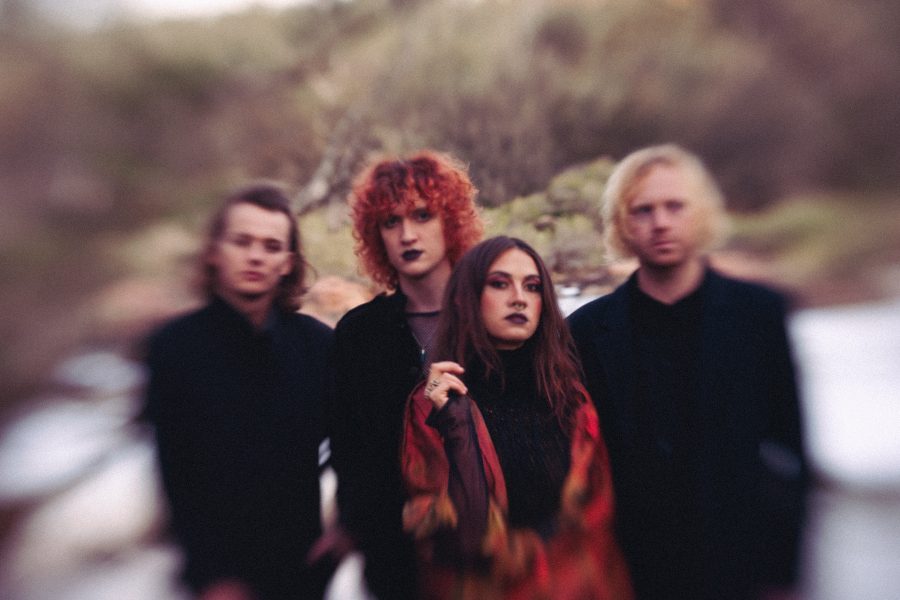 Spellbinding. Captivating. Bewitching. Seductive. Primal. Preternatural. Moana is the creative project of artist Moana Mayatrix, once described by JJJ’s Gemma Pike as one of Australia’s fiercest frontwomen, who is currently working in collaboration with musicians Lochy Hoffmann, Austin Rogers and Willow Fearns. Since the group’s inception in 2013, countless words have been written about the avant garde art rock outfit, all edging around the idea that there is something otherworldly, verging on genuinely dangerous, about this act. Combining the shamanic stream-of-consciousness poetry of peak-era Patti Smith with psychedelic melodies, grungy guitar licks, and propulsive rhythms, Moana doesn’t so much craft songs as pagan prayers set to the heartbeat of the world.

Moana transgresses the boundaries of form and genre, incorporating experimental art, theatre, spoken word performance, poetry, costuming, and more in a cross-media syncresis that engages all the senses physical and beyond, in a kind of ecstatic reverie. A singular approach to music and art has gathered to them a fiercely loyal tribe of fans, who have engaged with the project to successfully crowdfund not only their sophomore EP, The Trilogy of the Black Monsoon, but their upcoming debut album.

A regular and welcome fixture on the local live scene, Moana have played stellar local festival slots including RTRFM’s In the Pines, State of the Art Festival, Beaufort Street Festival, Norfolk Lanes Youth Festival, Rottofest and have supported the likes of Tim Rogers, Abbe May, and Ocean Alley. Their recorded works have received rave reviews including a slot in “Top 20 Albums of 2014” from X-Press Magazine and their music video The Killer, My Girl was a finalist in “Best Music Video” for the 2014 WAM Awards, while Vader was a Best Music Video finalist at the 2016 WA Screen Awards.

Moana’s debut LP ‘In The Allure’, released in 2019, sees their music push into uncharted territory, resulting in a sound that is weirder, heavier, prismatic. The 10 track album is an exploration into the wild feminine and the brutal, beautiful natural world, the metamorphosis of insects and humans.

Moana’s new single ‘KINGDOM’ was released to a sold out venue in October, 2020. Described by music critic royalty Bob Gordon as “Epic. Poetic. Atomic. Eclectic. Moana’s Eastern-tinged new single, ‘Kingdom’, takes you through ancient valleys into new skies above and leaves you craving eternity…” Moana’s new single is a high-energy divergence from the raucous heavy of ‘In The Allure’. The single incorporates more elements of Moana’s diverse expression, foreshadowing a wider focus in their music while flying true to their Eastern melodic style.