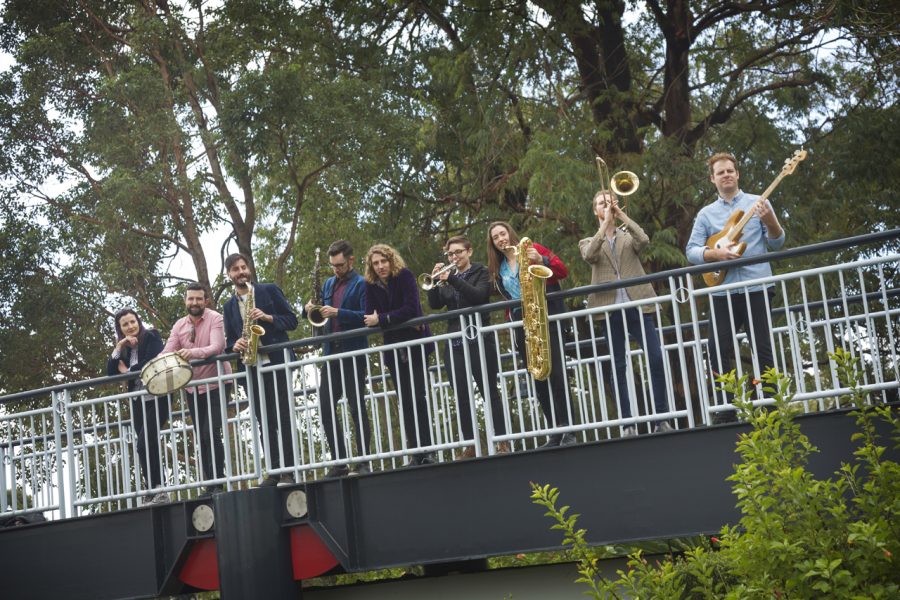 The genre-defying Steve Hensby Band are heavy on the horns and very danceable!

2020 has seen the release of their third album ‘Modern Music For Modern People’ to rave reviews, both national (Triple J) and international radio play, and busy dance floors at live shows.

‘Modern Music For Modern People’ is a concept album about Mista Twista and his interactions in the world in 2020. He is a quirky man who enjoys the quiet life working in his barbershop and has brilliant stories to tell of his adventures and travels. In Act 1 he is transformed from barber to celebrity when his band hits the big time only to fins himself surrounded by the perils of modern life – the internet, selfies and politicians. After a brief intermission Act 2 begins – he starts feeling the pressure of modern life but aside from that, the oceans start rising and Armageddon strikes the world. At the end of the album the only two people left on the earth is Mista Twista and his lover all alone serenading each other trying to survive to live to fight another day.

Their well-received self-titled double album debut (2017) featured folk and world influences fused to make a gypsy/circus style album. ‘Wake Up In Bordeaux’ made it to the Top 20 WA songs of 2017.  For 2019’s follow up, ‘Chase the Sun’, they drew from soul/funk/world music and added a slamming five-piece horn section. The title track is a collaboration with MC Optamus from WA hip hop legends, Downsyde.

Dec./Jan. 2019 saw them embark on their first UK tour in duo form, with Steve’s humour, talent and energy combined with Elysia’s beautiful vocals and their on-stage chemistry never failing to win over audiences in their eight shows. The Duo toured Brisbane and Melbourne in April and again in September/October before returning to play another 13 shows in the UK in Jan 2020, spanning even more cities, venues and genres; blending their mix of folk, world, jazz and pop with their own inimitable style and humour.

Both albums have had heavy airplay including Triple J and Double J as well as community radio stations all across Australia, with ‘Time’s Up’ and ‘Loving Heart’ appearing on Triple J’s Unearthed Charts. Their infectious, genre-bending song (in French!) ‘Naf Naf’, was nominated for the 2019 WAM Song of Year and also won the Revelation International Film Festival Award for Best Music Video.

Steve’s ode to hecklers (G’Day Mate Do You Know Any AC/DC Songs?) is currently placed in the semi-final heat of the International Songwriting Competition under the Musical Comedy category.